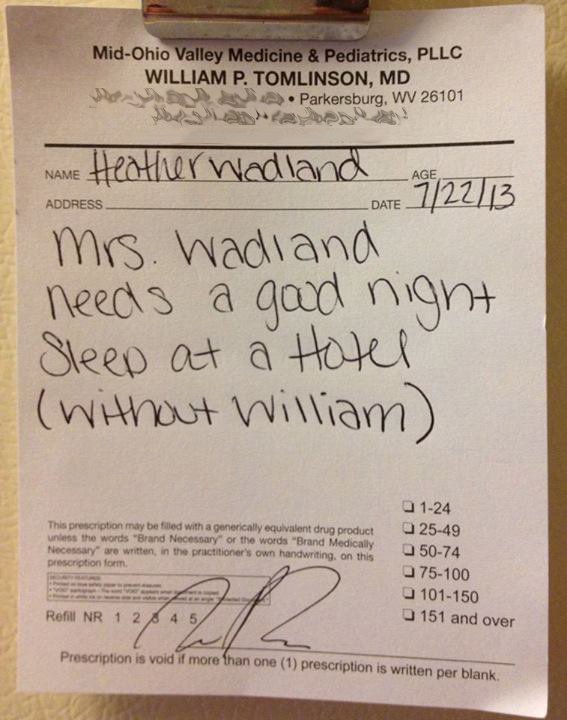 Last week my friend Heather posted this picture on her Facebook page last week and I thought it was funniest/coolest thing I have seen a regular doc do in a long time!

I asked her if I could share it on the M+BL Facebook page and she said of course! Then we both realized that she forgot to white out the numbers of the doctor’s license, so I took it down. Then I thought I would do a full post on it, because several people thought it was a fake. But this is real folks! The nurse actually wrote the prescription and the doctor signed it, for those skeptical of the nice handwriting!

My friend has a toddler boy and has not gotten much sleep lately, they  are about to move and her son has reverted to younger sleeping habits, i.e. waking up all night long. To make matters worse, her husband is not home a lot because he has already moved to their new location for his new job. When she busted into tears at her son’s doctor appointment, they kindly wrote her this prescription.

When Penelope was about 3 months old, I thought I might as well make the most of not being to nurse her like normal (I was exclusively pumping for her because she could not nurse and giving her bottles of my milk) and let my husband take a night shift here and there so I could get a full nights sleep. We only did it about 3 times, before we got Penelope to latch and she quickly only wanted to be comforted back to sleep by me nursing her, but those three nights were glorious! You don’t realize how sleep deprived you are, or how bad sleep deprivation is messing with your mind and body until you get some sleep.

When Penelope was older we took turns sleeping in and tending to night time wakes up to try and catch up on sleep, but since we moved she has also regressed and wakes up more frequently and wants nothing to do with my husband, only cuddling with mama will suffice. So this summer I have been exhausted and in desperate need of sleep. Twice this summer, my husband has taken Penelope with him to his parents house in Miami  for the weekend, so I could get some work done and so I could sleep. And each night I have been alone and able to sleep in, I have slept 12 to 13 hours straight!

After those nights I feel like a new person! My mind is balanced, I don’t feel teary and like I am so close to the edge and I have boundless energy and patience.

So if at all possible mamas, I highly recommend you take this doctor’s advice and mine and take a night or two  yourself once a month or every couple of months at the minimum. You will be amazed at what a difference one night of 12 hours of sleep will do!