You are here: Home » Blog » Healthy Kids » Tools For Talking With Young Children

Sometimes we say things to our children that are old stand-bys or critical blasts of frustration. But we know we want to model mindfulness and better emotional regulation. As soon as we say something that doesn’t match what we’d prefer, we wonder, “Why did I say that?” There can be many causes. I’ll touch on a few in this article, including about how we were raised, fatigue and stress, current trends, and fear.

To be good role models for our children we need to use good communication, the subject of my book What Not to Say: Tools for Talking with Young Children. The first step in using clear and positive language with a young child is gaining awareness of what you are really communicating, through not only words but also body language, actions, and tone of voice. Send the right messages by modeling behavior you want, and using words and a tone you’d like to hear back. Even the child who is too young to talk is paying close attention and storing information about what you say and the way you interact with him and others around you.

Likewise, children communicate to us through not only words but everything they do. Part of our job as grown-ups is to figure out the message when there are no words. Sometimes it’s an expression of interest, for example, a toddler who may be thinking, That lamp cord looks so appealing I want to grab it. Other times it’s a feeling, a need, or both: I’m tired and need to take a nap or My brother is getting all the attention and I want some. If you can decode what may be motivating a child, it will help you understand his actions. You can then respond in a more understanding and productive way.

Remember that making changes is a process, not a prescription. Be gentle with yourself and your children. We want to treat them well but often miss the mark by saying something that just doesn’t work. Out comes an old stand-by or a critical blast of frustration. When we say ineffective or inconsiderate things to children, it doesn’t mean we are bad people—there are reasons why.

How we were raised:

Unthinkingly we parrot what our parents said because we heard it so often in childhood. Some classics like “Don’t be so sensitive” are passed down from parent to child. With other sayings, each generation comes up with new ways of expressing the same ideas. Your grandmother might have said, “You’ll be the death of me”; your dad put it, “You’re giving me gray hair”; and now you say, “You’re stressing me out!” Too often such automatic expressions are meaningless or even harmful to young children. Have you ever said, “You are such a pain”? If you then thought, I can’t believe I just said that, you’ve already taken a big first step.

At times what we say is a matter of the quickest, easiest way. Adults give knee-jerk responses because we are worn down—kids can sap so much of our energy. When they keep asking why they can’t have something or do something, it’s easy to defend your “No” with “Because I said so.” A harried teacher or a mom who is on call day and night might dismiss a fussy child with, “Just cut it out!” If you hear yourself saying these things, it’s a clue that your own needs for adult conversation or rest are not being met. As fellow parenting educator Carrie Contey has said: “Self-care is not a luxury!” (Carrie Contey’s site: http://carriecontey.com/)

Ways of speaking to children that follow cultural patterns can wear thin. For example, “Good job!” is repeated so often nowadays that a child becomes deaf to the message. Or adults might try to emphasize current attitudes, such as children now being expected to be heard as well as seen, and repeatedly say, “I hear that you . . .” An overly permissive parent can get into the habit of saying, “OK honey, if that’s what you want.” Mindlessly parroting these popular phrases is a path to nowhere.

Many adults are afraid, afraid of harming children emotionally or provoking temper tantrums (no fun!). In general, parents, teachers, and caregivers are more worried than in the past about making mistakes, or causing children to get angry or unhappy or become alienated. When it happens, we may feel guilty or inadequate. Of course no child grows up perfectly happy. But a child can grow up with emotional intelligence—anger, frustration, and “unhappiness” are all part of being human. Staying with children and helping them through the tougher, less comfortable emotions is good for their development.

Sometimes we will not know what is bothering a child, or motivating her behavior. But we can always choose to be kind and supportive despite their mood. I know it’s a mixed metaphor, but I like to say that children are emotional barometers, but the adults set the thermostat. Try to set it somewhere that’s relatively comfortable—and be ready to weather the inevitable highs and lows.

By Sarah MacLaughlin, Award-winning Author of What Not To Say: Tools for Talking with Young Children 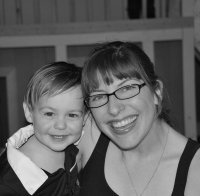 About The Author:
Sarah MacLaughlin has worked with children and families for over twenty years. With a background in early childhood education, she has previously been both a preschool teacher and nanny. Sarah is currently a licensed social worker at The Opportunity Alliance in South Portland, Maine, and works as the resource coordinator in therapeutic foster care. She serves on the board of Birth Roots, and writes the “Parenting Toolbox” column for a local parenting newspaper, Parent & Family. Sarah teaches classes and workshops locally, and consults with families in the United States and around the word. She considers it her life’s work to promote happy, well-adjusted people in the future by increasing awareness of how children are spoken to today. She is mom to a young son who gives her plenty of opportunities to take her own advice about What Not to Say. More about Sarah and her work at: http://sarahsbalancingact.blogspot.com/